1. Obelia is a very tiny marine animal with a height of 2 cm or a little more.

2. Its body has two kinds of filaments; hydrocaulus and hydrorhiza.

4. Hydroid polyps are small, immobile animals that have tentacles and stalks.

6. Polyp stage is immobile but the Medusa stage is motile.

7. Their body wall consists of two basic layers. The outer is the epidermis and the inner is the gastrodermis.

8. There is a layer between epidermis and gastrodermis, called Mesoglea. Mesoglea is a jelly-like material.

9. They have tentacles surrounding their mouth which help them in preying and capturing food. Tentacles in medusa help them in locomotion also.

10. Obelia has an incomplete digestive tract.

11. The life history of Obelia exhibits alternation of generations between sexual and asexual and is termed as metagenesis.

1. Obelia is typically a marine, colonial, and sedentary animal.

2. They have a cosmopolitan distribution.

3. Abundant in both Pacific and Atlantic coastal waters.

5. It occurs in asexual and sexual forms.

6. The asexual form is a hydroid colony attached to rocks, stones, shells of animals, wooden piling, etc. and the sexual form is an umbrella-like free-swimming stage.

A. Morphology of Hydroid Colony 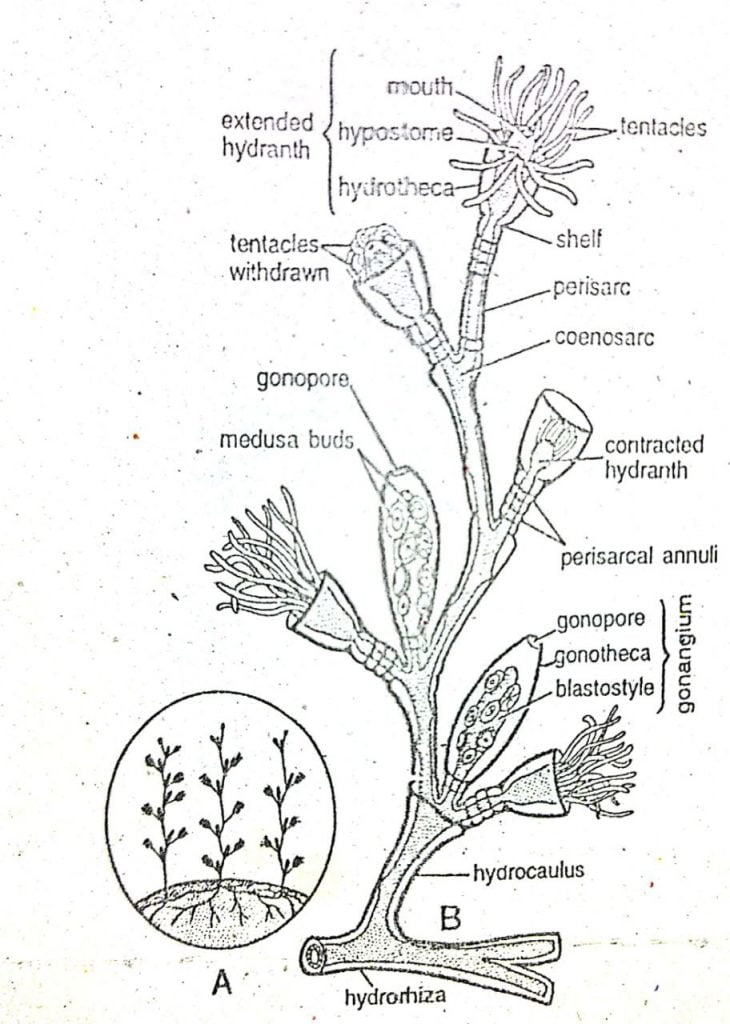 The term zooid is used for an individual form of a coelenterate colony. Hydroid colony exhibits two types of individuals or zooids and they are polyp and blastostyle.

B. Morphology of Medusa 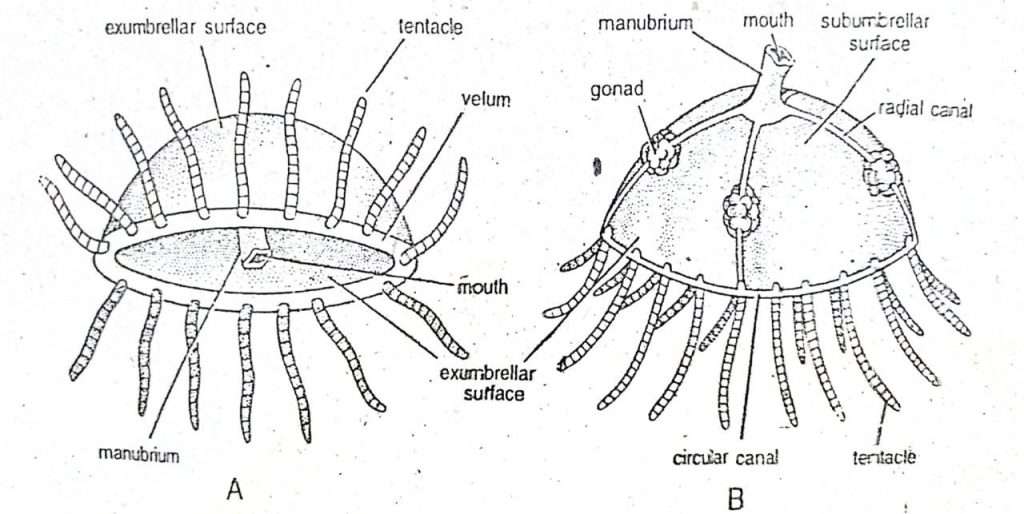 1. The nitrogenous waste material of Obelia is ammonia.
2. Obelia does not have any special excretory organ.
3. It excretes the waste materials by diffusion through the body wall.

1. As polyps are sessile, they do not require any sense organs.
2. Medusae have a specified sense organ named statocyst. They have eight marginal statocysts.
3. While swimming, medusa may lose their body balance and they can regain their balance with the help of statocyst.
4. Statocyst is a fluid-filled sac lined by sensory epithelial cells.
5. There is a round particle of calcium carbonate in the cavity of the statocyst. The round particle is called statolith or otolith.
6. Statolith is movable and secreted by lithocyte.
7. Statocysts are considered to be the organs of equilibrium and muscular coordination.
8. During swimming, if the body becomes tilted, the statolith falls over the tilted side against the process of sensory cells which become stimulated.
9. In this way, a nerve impulse is created and transmitted to the nerve ring and with some other processes, the medusa gets back to the normal position.

2. Hydroid colony has polyps or gastrozooids. After maturing the polyps, gonozooids or blastostyles arise from the axis of the polyps.

3. Inside the blastostyles, the medusa buds develop gradually. 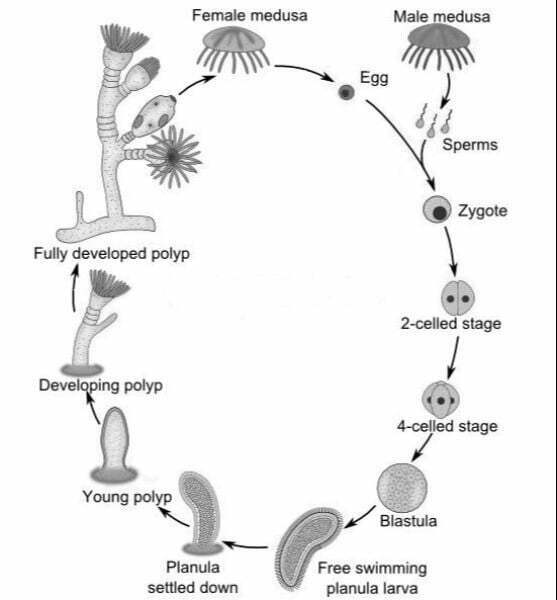 5. Then the young medusa gets matured.

6. After maturing, both the male and female medusae release gametes in the water.

7. Fertilization is external and the parent medusae die soon after releasing the gametes.

8. After fertilization, the egg and sperm form a zygote.

12. After finding the substrate, the planula larva settled down.

13. Then the larva turns into a young polyp.