1. They have a wide distribution across South and South East Asia.

2. They are bilaterally symmetrical.

3. Their skin is naked and rough and they have parotid glands for their defense.

5. The tympana are oval or circular in shape.

6. The most color pattern is pale yellow-brown.

7. They breed during the monsoon, and their tadpoles are black.

8. They show sexual dimorphism and the male is larger than the female.

9. Their Mating System is polygynandrous.

11. They are mainly insectivores.

12. The body is divisible into the head and trunk.

13 They are cold-blooded or poikilothermous. Because of this fact, toads enter into the winter sleep during colder months and this phenomenon is called hibernation.

3. They are nocturnal and terrestrial toads.

4. Adults are found under ground cover such as rocks, logs, etc.

5. They are insectivores and feed on insects including scorpions. 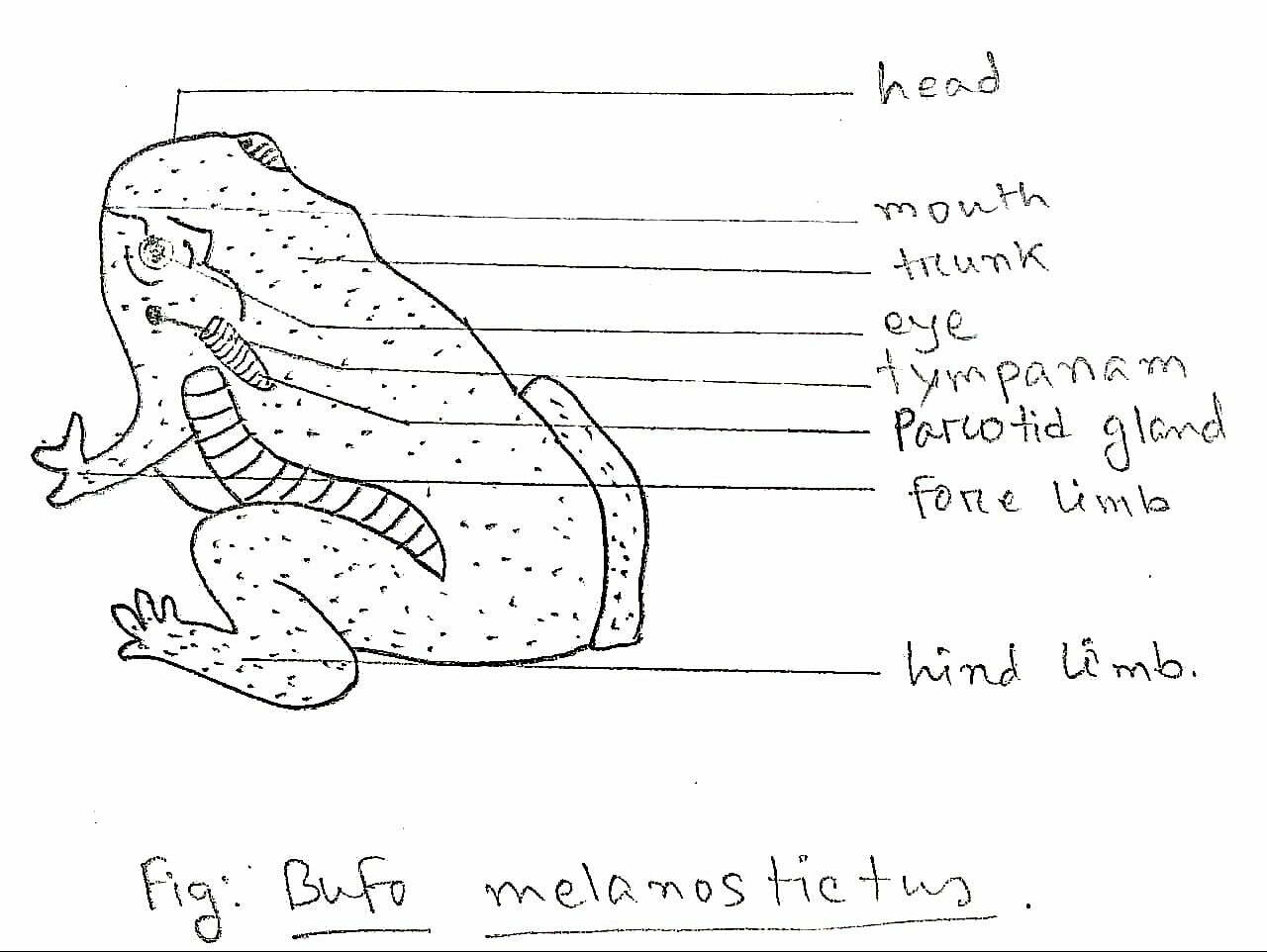 1. Body of a toad is somewhat spindle-shaped, anteriorly pointed, and posteriorly rounded.

5. Body is divisible into the head and trunk.

1. They have thick, dry, naked, and rough skin with prominent cranial ridges and protruding parotid glands.

2. Their skin is also used in respiration and during the hibernation period, the toads respire with their skin.

3. The color pattern is pale yellow-brown; the dorsal side is brownish and the ventral side is yellowish.

4. Toads can change the color of their body to match the surroundings.

5. Postanal tail is absent in the adult stage.

1. The largest transverse aperture, located at the terminal end of the head is the mouth.

2. At the anterior dorsal side of the head and above the mouth, there are two small rounded apertures, known as nostrils. They serve in the respiration of the toad.

4. The eyes are very prominent, large, and protruding. Each eye has a thick upper eyelid and a thin ill-developed, semi-transparent lower eyelid.

5. The eyeball of the eye is covered over by a thin, transparent nictitating membrane which is also known as third eyelid.

6. Behind and below each eye, there is a circular area known as the tympanum or eardrum.

7. External ear is absent in toads. The tympanum or eardrum works as the receptor of sound waves.

8. Behind each tympanum, there is a gland on either side of the head called the parotid gland. It secrets poisonous liquid and it works as the defensive organ of toads.

9. In male toads, there are vocal sacs inside the throat. With the help of these vocal sacs, the male toads keep croaking during the breeding season in search of the female.

1. Head is joined behind the trunk. The trunk is the broad, short, and flattened part of the body of a toad.

2. Numerous small elevations, known as warts, are present on the dorsal side of the body.

3. There are two pairs of limbs present in the trunk region.

4. Limbs are unequal in size and forelimbs are shorter than the hindlimbs.

5. Forelimbs are consists of brachium, ante-brachium, wrist, and manus(hand). The hand has four digits.

6. In male toads, there is a thumbpad develops during the breeding season which helps the male’s grip during amplexus. Amplexus is a type of mating behavior exhibited by Asian common toads.

7. Hindlimbs are much longer and stronger than forelimbs.

8. Each hindlimb consists of the femur(thigh), crus (shank), and pes (foot). The foot has five elongated digits.

9. The digits of the hindlimbs are jointed and help the toad in swimming.

10. Hindlimbs are modified for jumping and swimming.

11. At the posterior end of the body there is an aperture located between the hindlimbs, is cloaca.

1. Two types of glands are present on the dorsal side of the toad’s body.

2. The two types of glands are: 1. Mucous glands, 2. Parotid glands or poison glands.

3. There are numerous bumps or warts present on the skin of the dorsal side of the body. These are the mucous glands. Mucous glands are much smaller than the poison glands.

5. Parotid glands or poison glands are located behind the tympana and these are the offensive and defensive organs of the toads.

1. The brain is located inside the cranium.

3. Prosencephalon is the anteriormost part of the brain and it is further divided into two parts. Anterior telencephalon and posterior diencephalon.

4. A pair of small olfactory lobes arise from the telencephalon and these lobes are responsible for the sense of smell. The rest of the telencephalon comprises of two lobes called the cerebrum or cerebral hemispheres.

6. Behind the cerebrum, the depressed part of the brain is called the diencephalon.

7. The ventral side of the diencephalon bears ‘X’ shaped optic chiasma which is formed by the optic nerves and responsible for the sense of sight.

8. Optic thalami are present on the lateral sides of the diencephalon.

10. The optic lobes are present in the midbrain.

11. The posteriormost part of the brain, the rhombencephalon is divided into two parts 1. Metencephalon and 2. Myelencephalon.

12. A thin transverse band like the cerebellum is present in the metencephalon.

13. Medulla oblongata is present in the myelencephalon.

14. The cerebellum coordinates the movement of the body and the medulla oblongata controls and regulates some vital processes like regulation of heartbeat, metabolism, respiration and etc.

15. Some well-formed internal cavities, called ventricles, are present in the brain. 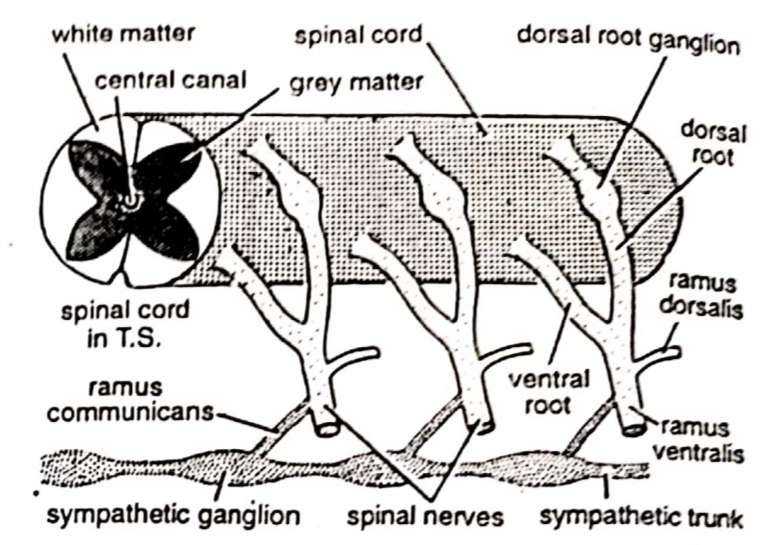 1. The spinal cord is a hollow tube.

2. It extends posteriorly from the medulla oblongata.

3. It remains encased within the neural canal of the vertebral column.

4. The spinal cord has a dorsal fissure and a ventral fissure on its middorsal and midventral lines.

5. The cavity of the spinal cord is known as neurocoel. 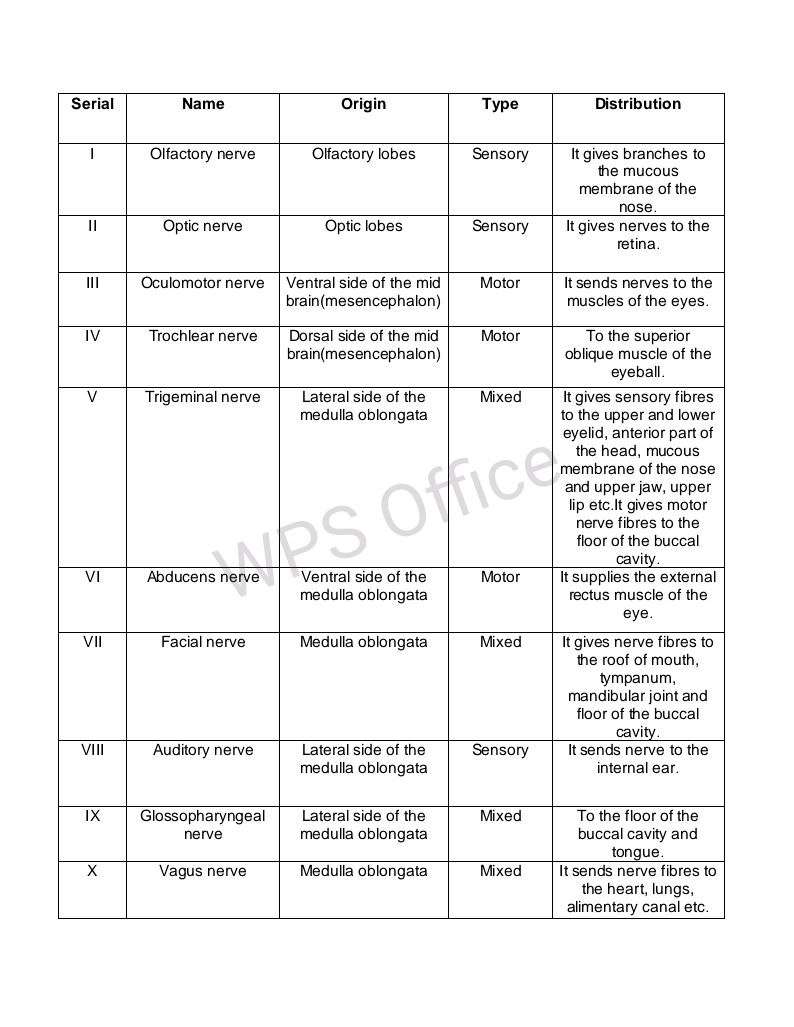 Table of the Cranial nerves of Asian common toad

1. There are ten pairs of spinal nerves present in the toad.

2. All the spinal nerves are mixed types.

3. The first spinal nerve, hypoglossal, supplies to the muscles of the tongue.

4. The second and third spinal nerves of a toad form the brachial plexus.

5. The fourth, fifth, and sixth spinal nerves of a toad supply the integument and the muscles of the trunk region.

1. The activities of the autonomic nervous system are somewhat independent.

2. This nervous system regulates the involuntary activities of the body like heartbeat and peristalsis of the alimentary canal.

4. The sympathetic trunks are located on either side of the dorsal aorta.

5. The sympathetic trunks supply the branches to innervate the cardiac muscles, blood vessels, and alimentary canal.

The sense organs are the receptors for external stimuli. These organs receive sensations or stimuli due to changes in the external or internal environment. With these sense organs, the central nervous system keeps the information about the outside environment. Like man, toads have five types of special sense organs and they are

4. Sense organ of sight and

5. Sense organ of hearing and balancing.

1. The receptors or organs of touch have another name called tangoreceptors.

2. Toads have numerous microscopic cutaneous sense organs under the epidermis of the skin.

3. These tangoreceptors are sensitive to various types of stimuli such as touch, temperature, humidity, chemicals, light, pain, etc.

1. The receptors or organs of taste have another name called Gustatoreceptors.

2. Taste organs are in the form of taste buds present in small papillae on the tongue and floor and roof of the buccal cavity.

3. Taste buds are made up of two types of cells; the taste cells and the supporting cells.

4. The taste cells are innervated by nerve fibers of facial and glossopharyngeal cranial nerves.

1. The receptors or organs of smell have another name called Olfactoreceptors.

2. These receptors are scattered in the nasal passage.

3. The Olfactoreceptors have two types of cells; olfactory cells and supporting cells.

4. Receptor cells have fine cilia on their outer ends and are attached to the nerve fibers on their inner ends. The fibers unite to form the olfactory nerve which carries the odors to the brain.

1. The receptors or organs of sight have another name called Photoreceptors.

2. The two large eyes are the photoreceptors of the toads.

3. Each eye has a spherical body called the eyeball.

3. Both eyeballs are spherical in shape and lodged inside an orbit. 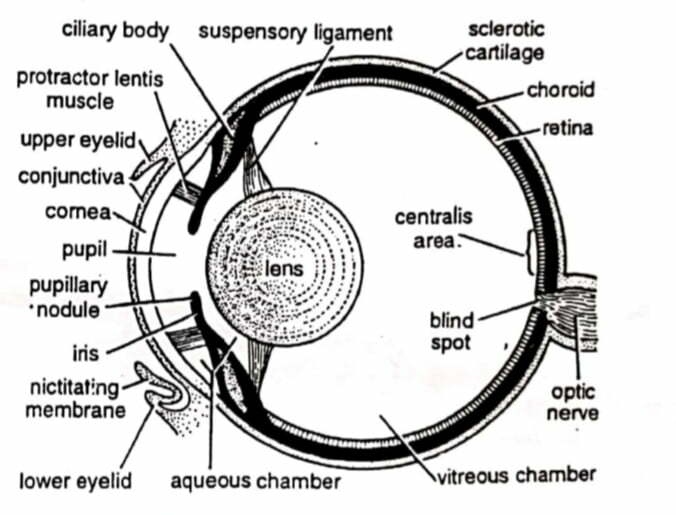 6. The eyeball of the toad is made of three concentric layers or coats, an outermost sclerotic, a middle choroid, and an inner retina.

1. The outermost layer of the eyeball is the sclerotic layer.

3. Cornea is the transparent, circular, and anterior part of the sclerotic layer.

4. Cornea permits the light rays to enter into the eye.

5. Cornea is covered with thin and transparent conjunctiva.

1. Choroid layer is located underneath the sclerotic layer.

2. Choroid is a richly vascularized and pigmented layer.

3. At the anterior end of the choroid, just behind the cornea, the choroid forms a pigmented circular disc called the iris.

4. The iris has an aperture at the center named pupil.

5. The iris has circular and radial muscles. The pupil can contract and dilate with the help of these muscles.

6. The whole eyeball is lightproof except the pupil.

7. The iris regulates the entry of light into the eyeball.

8. Suspensory ligaments are located just behind the iris and they keep the lens in position.

1. The innermost layer of the eyeball is the retinal layer.

2. This is the only light-sensitive part of the eyeball.

4. Cone cells work in the bright light and the vision is colorful.

5. Rod cells work in the low light and the vision is colorless.

6. Photosensitive cells are connected with the optic nerves.

7. The spot where the optic nerve comes out of the eyeball is called the blind spot. It lacks rod and cone cells so it can’t form an image.

8. Light falling on the retina stimulates rods and cones and the impulses are conducted by the optic nerve to the brain.

1. Light rays pass through the cornea, pupil, and lens and reach the retina.

2. In the retinal layer, an inverted and reduced image is formed.

3. Inverted image is transmitted to the brain with the help of optic nerves.

4. Then the brain adjusts the image.

5. Toads are myopic and can efficiently see only near objects.

Sense organs of hearing and balancing

1. The two ears are the sense organs of hearing and balancing.

2. The ear of toads consists of two parts and they are middle ear and internal ear.